Our regular monthly 9-Ball tournament will resume on 9 March 2014. Please confirm your participation by notifying us by e-mail, by FB message or by phone. Participation will be by "First come. first serve basis". So please register as soon as possible. Thank you. 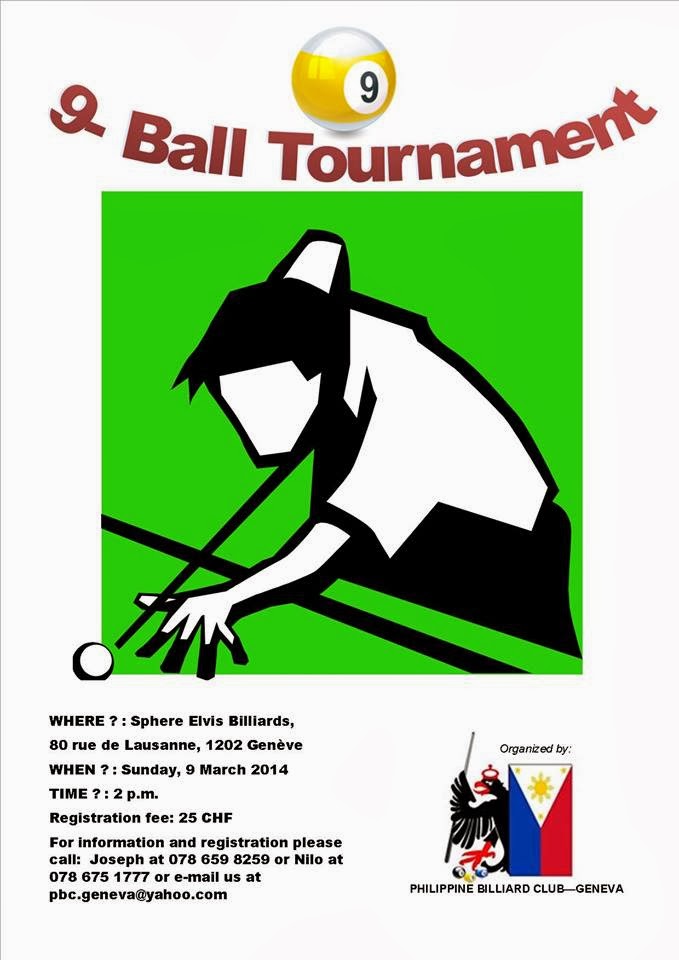 Posted by pbc.geneva at 1:40 AM No comments: 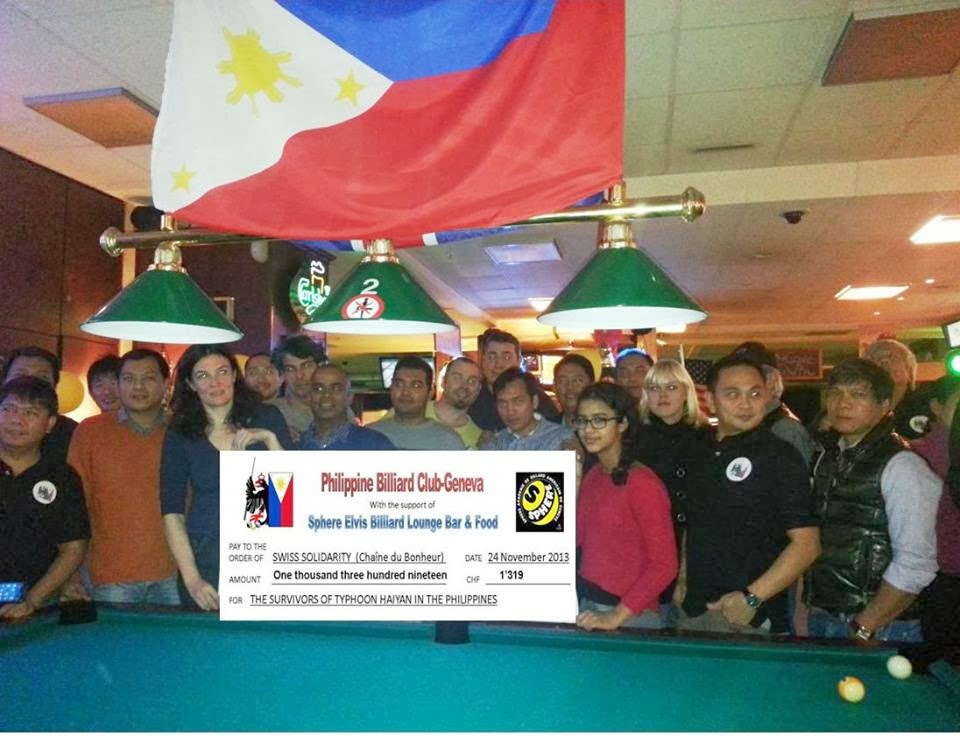 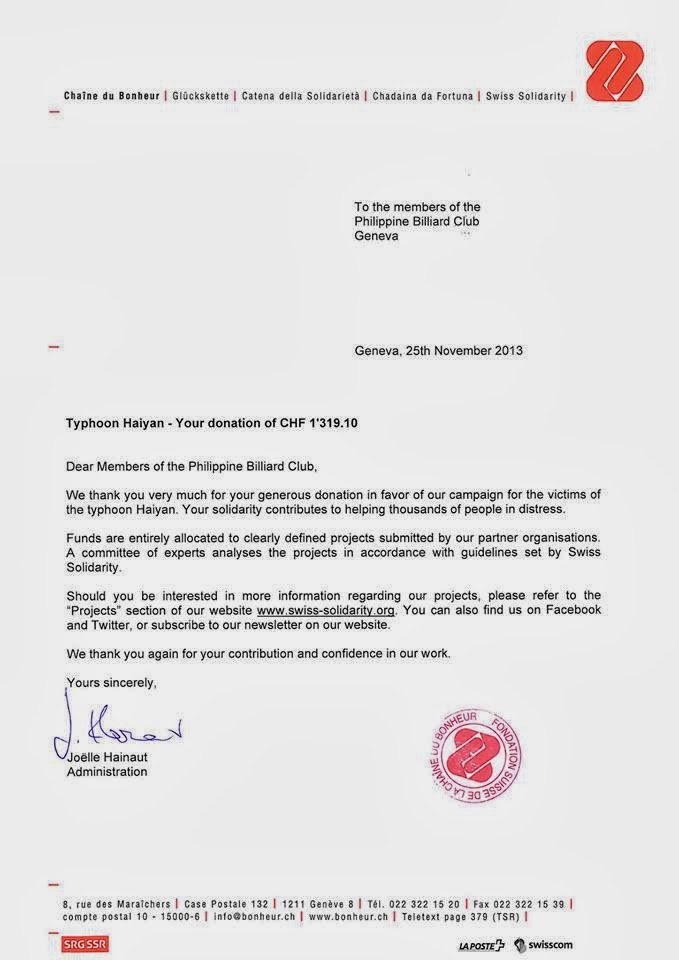 Thank you to all the participants and supporters of the PBC's Solidarity Tournament. We have raised 1,319 CHF for the relief and rehabilitation of typhoon victims in the Philippines which we have donated to Chaîne du Bonheur (Swiss Solidarity) Special thanks to Mr. Elvis Ambord of The Sphere Billiard for his support, to Jonni Fulcher, Paulo Graça, Ken Nanakorn and the Geneva Pool Community, to those who contributed food, Raymundo & Shane Ruben, Jerry Quinto, and Nilo and Len Teodoro, to Mylene Soto who assisted us in the collection and to Isabel Mapanao, who spoke on behalf of PBC-Geneva. Maraming Salamat po!!
Posted by pbc.geneva at 1:26 AM No comments:

Play 9-Ball pool for a good cause

The Philippine Billiard Club-Geneva, with the support of Elvis Sphere Billiards will be having a solidarity pool tournament for the victims of Typhoon Haiyan in the Philippines.  Come and join us !!!! 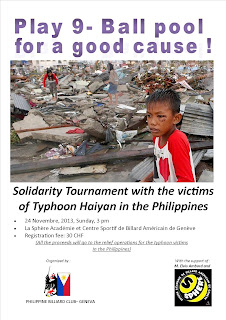 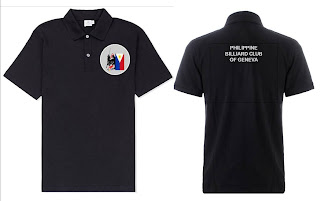 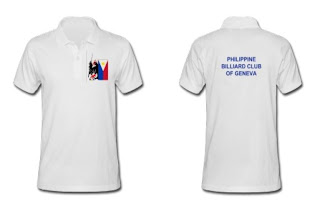 For information, contact PBC-Geneva at:  pbc.geneva@yahoo.com or leave a message at this blog or our Facebook page:   http://www.facebook.com/pages/Philippine-Billiard-Club-of-Geneva/172056694929?ref=hl
Posted by pbc.geneva at 9:39 AM No comments: 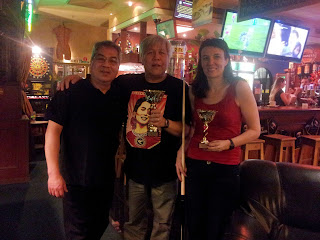 Joseph Sycip demolished Leo Barroga 5-2 to bag the 32nd edition of the Asian 9-Ball Tournament at the La Sphere Billiard Center.  Barroga came out strong in
the first to racks advancing 2-0.  However, Sycip came back from behind by taking the next 2 racks to equalize the score.  Then, the fired-up Sycip took the next three straight racks to put the icing on the cake.

The battle for 3rd place was won by Isabella Pacchiani who nipped Bong Malabonga 3-2.  It was a neck-to-neck race that saw both players equally taking two racks each. However, in the final rack, Pacchiani pocketed a double bank shot on the 9 ball to win the game.

The next tournament is scheduled on the 21th of April.
Posted by pbc.geneva at 12:56 AM No comments: 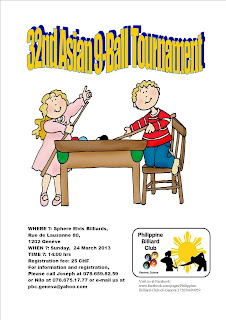 The Asian Tours continues with the 32nd 9-Ball Tournament to be held this Sunday, 24 March 2013 at 2 pm at the Sphere Elvis Billiards, Rue de Lausanne 80, 1202 Geneva.  As usual, we will be having a friendly competition and lots of fun for our player participants.  Come and join us. Bring your friends along. 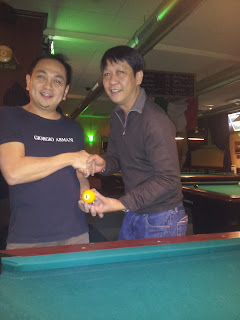